Over the past week a monkey in the West Champaran district of Bihar, east India, has attacked three train drivers.

AK Jha, a railway official in the region, says the money is determined "to take revenge for the death of one of its siblings." Last week, a monkey was run over by a goods train near the Valmiki Nagar Train Station. 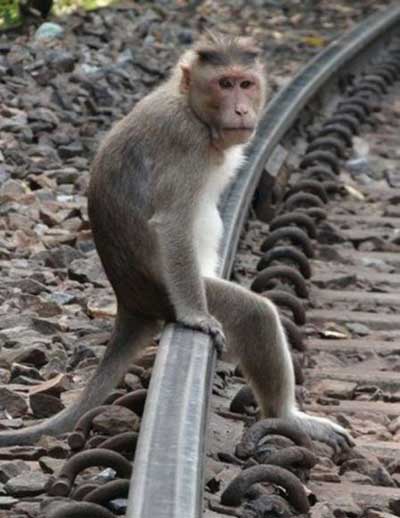 Since then, his avenger has been busy. The driver of a goods train was attacked on Saturday and had to be rescued by railway officials. The monkey then attacked another goods train driver but he was able to lock himself in the engine cabin.

"Another goods train driver attacked by the monkey flashed a distress message on his walkie talkie to the station staff to rescue him," Mr Jha said. Now, train drivers have been asked to be alert when they stop their trains at the station.
Posted by arbroath at 6:03 am
Email ThisBlogThis!Share to TwitterShare to Facebook

Wow! The animals are fighting back!

Elephants do the same thing, Barbwire.