A rhinoceros that escaped from a nature reserve charged into a town in southern Nepal on Monday, killing a woman, injuring several others and chasing panicked people through the main market and a hospital. 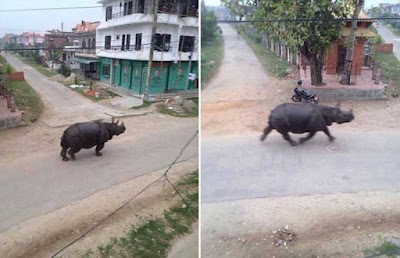 Attempts to force the rhino out of Hetauda city by honking car horns and beating drums were unsuccessful, with the animal running from one area to another, government administrator Ram Prasad Thapaliya said.

Teams with tranquilliser guns were on their way to attempt to capture it, he said. Thapaliya said the rhino gored a 61-year-old woman on the outskirts of Hetauda. An unknown number of people were injured, he said. 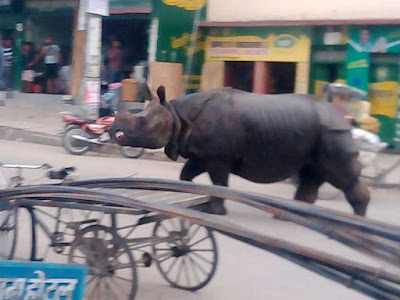 It chased people around the main market and the city bus station, he said. “The whole town is terrorised by this animal. It even entered the local hospital, forcing terrified people to jump over the fences,” Thapaliya said. Hetauda is about 50 miles south of Kathmandu, Nepal’s capital.
Posted by arbroath at 6:04 am
Email ThisBlogThis!Share to TwitterShare to Facebook

That doesn't come close to evening the score for all the rhinos killed so their horns could supposedly amp up somebody's sex life.