A row has broken out after a pregnant mother said her children found a nine-inch meat cleaver in a hotel room where they had been temporarily rehomed following a large fire. Donna Lever, 38, had to leave her rented house when it was badly damaged in the blaze triggered by a faulty tumble dryer. But Ms Lever said she was disgusted when she saw the cleaver and several cans stuffed into a rip in the side of a bed in the hotel in Blackburn, Lancashire. She said she told a member of staff about cleaver and reported the incident to Rossendale Council, which had placed them in the hotel, when they left. 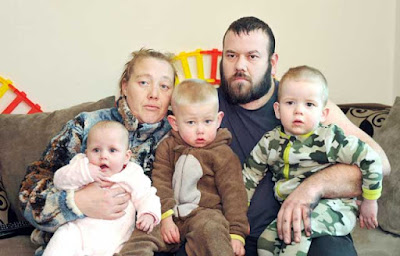 Rossendale Council confirmed it had received the complaint following the family’s stay. EJ Hussain, manager of the Hill View Hotel in Blackburn, however said the room had been ‘inspected thoroughly’ before the family arrived and no concerns were reported to him during their stay. He later contacted the police to claim a bed had been damaged by the family. Miss Lever and her partner, David Johnson, 32, said they were out with their children when the fire ripped through their property. Because their home was so badly damaged they were told they must go into temporary accommodation. 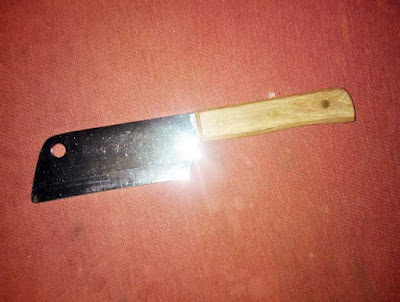 Mr Johnson said when the children spotted the cleaver, which he believes was left there by a previous guest, he took a picture of it on his phone to prove it was in the room. Miss Lever, who is 18 weeks pregnant, said: “I couldn’t believe it. From the outside, the hotel looked presentable but the accommodation clearly hadn’t been cleaned before we arrived. There was a rip to the bed and a load of tin cans stuffed inside. It was bad but I never expected to find a meat cleaver. It’s a weapon. We were moving a single bed against a wall so the kids, who were topping and tailing, wouldn’t fall out in their sleep, and they spotted it. I was disgusted. We were meant to stay for two nights but we told them the next morning we were leaving. 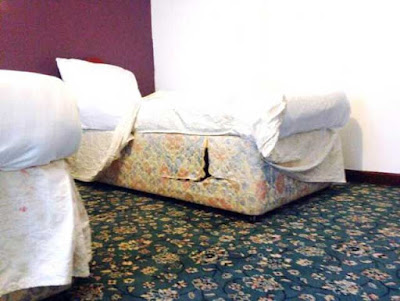 “On the way out, I told a lady working there about the the cleaver. Now we’re back in the smoke-damaged house, despite the fact the fire service told us it wasn’t safe for me to be there while I’m pregnant.” The couple, who are full-time parents, and their young four children are now sleeping on the kitchen and living room floors of their damaged house. Mr Hussain refuted Miss Lever’s claim that the room was untidy and said the cleaver was not spotted during his staff’s prior checks. In turn, he accused the family of causing criminal damage to a bed and littering the room with cans - something they deny. Lancashire police said it received a report of criminal damage at the hotel and that officers had arranged a visit.
Posted by arbroath at 6:00 am
Email ThisBlogThis!Share to TwitterShare to Facebook

What have they got against birth control?

A picture is worth a thousand words.

Just suppose if they had found Beaver Cleaver instead?

N.B.: That's a _Leave it to Beaver_ ref.; not certain if the show ever played in the UK.

Oh great. It's an early-60s sitcom and only today, 55 years later, do I see what the writers did when they named the character.
Naughty, naughty, naughty ...