A train travelled for 27 kilometres backwards on Sunday, passing through three stations in Rajbari, central Bangladesh, without its driver. The Faridpur Express was finally be stopped near Pangsha station thanks to a ticket checker's presence of mind. With the help of some passengers, the ticket checker undid the air-brake hoses between three carriages, which put the brakes on and stopped the train. Some 150 passengers were on board the runaway train.

According to railway officials, minutes before the train was to leave Rajbari station for Faridpur at around 8:00am, its driver Mohammad Ali, who was not in the locomotive, sent his assistant Faisal Hossain to check the engine. Faisal did something wrong that made the train roll backwards on the Rajbari-Poradaha route. Ali was chewing betel leaf on the platform. “Before I could realise what was happening, the train shot out of the station,” the driver later said. 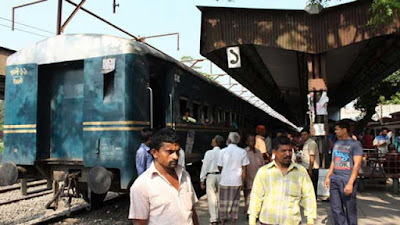 Failing to control the train, the assistant jumped off the moving train. “The train ran up to Pangsha Railway Station without any driver on board,” Bangladesh Railway Director (Traffic) Zahurul Islam said. It took quite some time for the passengers to realise that something was wrong. “I didn't understand what was going on. I got frightened when I learned that the train was without the driver,” said passenger Azbor Uddin, 52.

As panicked passengers started screaming, ticket checker Anwar asked them to calm down and help him stop the train, Azbor added. The train was then travelling at around 30km an hour. After some effort, they managed to stop it near Pangsha station at around 8:55am. By that time, it had passed through three stations. Driver Ali, his assistant Foysal and guard Subhas Chandra Sharma were suspended in connection with negligence of duty. The railway has formed a five-member team to probe the incident.
Posted by arbroath at 6:04 am
Email ThisBlogThis!Share to TwitterShare to Facebook