A frantic mother flagged down a passing tour bus after her son became trapped on top of a boulder in the Burren in County Clare, Ireland, on Monday. The child had climbed on top of the 5m (16ft) high rock but was unable to climb down. The incident happened at around 4.30pm at Ballyreen on the coast road between Lisdoonvarna and Ballyvaughan Co Clare. 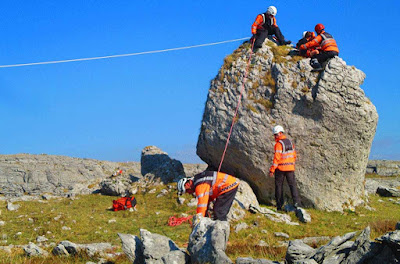 The area is popular with abseilers and rock climbers while large stand-alone rocks, that are spread across the karst landscape, are used for a past-time called bouldering. The six-year-old boy had been visiting family in Kinvara from Manchester in England and was accompanied by his mother and a sibling.

The child climbed up the side of the boulder but couldn’t get down again while his mother was unable to reach him. After spending some time trying to get down, the child’s mother ran to the nearby road and flagged down a passing tour bus. The driver alerted the Irish Coast Guard and the Doolin unit of the volunteer service was requested to attend the incident. 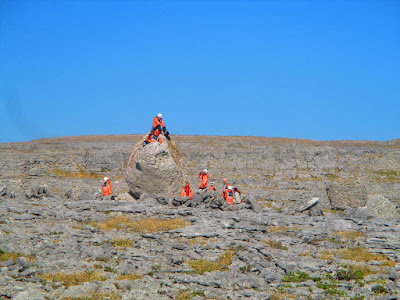 They were accompanied by members from the Kilkee unit who had been on a station visit at the time. Two volunteers climbed up onto the boulder and secured the child in a harness before lowering him to safety. The child, who was unharmed, was then reunited with his family.
Posted by arbroath at 6:00 am
Email ThisBlogThis!Share to TwitterShare to Facebook

I think it's pastime.