A tractor driver in Co Mayo, Ireland, who caused a 7km tailback on a national primary road, involving 80-100 vehicles, has been fined €300 and banned from driving for a year.

Judge Mary Devins was told by Garda John Boyle at Castlebar District Court that on June 20th last he came across “a convoy” of vehicles travelling eastwards on the N5 outside Westport, which were being held up by a tractor towing a trailer which contained a mechanical digger. 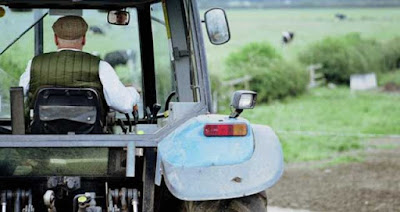 Mr Boyle gave evidence that after overtaking between 80 and 100 vehicles he got to the tractor which was keeping traffic at about 20 km/h. The garda said that when he spoke to the tractor driver, Brian McGuinness, of The Grove, Castlebar, Co Mayo, the defendant told him he thought he had pulled in earlier to let traffic go by.

Mr Boyle said that he had issued a fixed charge penalty notice to McGuinness but this had not been paid. McGuinness did not appear in court to answer the charge. After commenting that everybody has to exercise a little consideration on the road, the judge fined McGuinness €300 in his absence and disqualified him from driving for 12 months.
Posted by arbroath at 6:02 am
Email ThisBlogThis!Share to TwitterShare to Facebook

Now, if only we could get rid of all the caravans that do exactly the same, that would be grand!