A naked man went on the rampage in a toy store on Sunday afternoon.

Witnesses said the man crashed his car outside Toys R Us at the Kingsway West retail park in Dundee at around 3pm. 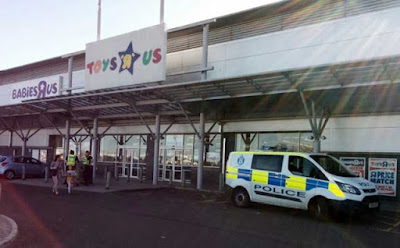 He then entered the shop and began swinging a cricket bat around as he “ranted and raved” in a foreign language. A police source said he removed his clothes as his violent outburst continued.

Emergency services were summoned and a woman was taken to hospital for treatment. Police confirmed a male had been detained in relation to an incident at the store.
Posted by arbroath at 6:00 am
Email ThisBlogThis!Share to TwitterShare to Facebook