A strange black circle was spotted in the sky above a village in northern Kazakhstan. 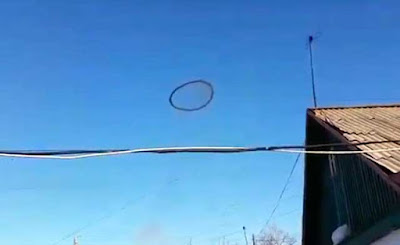 Baffled residents captured the mysterious spectacle on video as it hovered in the air for fifteen minutes before dissipating.

Villagers living in Shortandy, some 70 kilometres north of the Kazakh capital Astana, witnessed the event on Friday afternoon. “It was like a black cloud. It dissipated like smoke, but it was completely odourless,” Oleg Menshikov, a village resident, said.

Andrey Solodovnik, associate physics professor at the Northern Kazakhstan State University estimates the ring was about 100 metres in diameter and floated at an altitude of between 200 metres to a kilometre. Solodnovik suggested the giant hoop was most likely a large smoke ring and was the result of combustion.
Posted by arbroath at 6:01 am
Email ThisBlogThis!Share to TwitterShare to Facebook