A man's frantic search for his lost puppy ended a little closer to home after she was found sitting on the neighbour's roof. Matt Grant from Nelson, New Zealand, had been searching far and wide for Polly, a six-month-old Jack Russell, who had gone missing earlier on Monday. Polly, who was a Christmas present for his father, was noticed missing by someone who lived in the house, sparking a desperate 90-minute search. 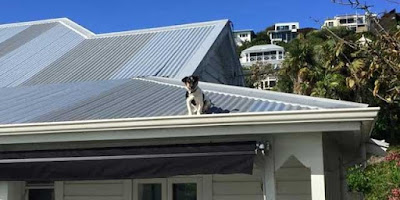 "We go out driving around the neighbourhood, knocking on a few doors and whistling around and then I came back and got to the point where I'm like 'I'm going to have to call the pound' or something because either she's been snatched or she's just gone complete walkabout," he said. He'd gone to a quiet place upstairs to call the SPCA when he looked out the window and saw something he didn't expect. Polly was sitting nonchalantly in a triangular patch of shade on the neighbouring roof. 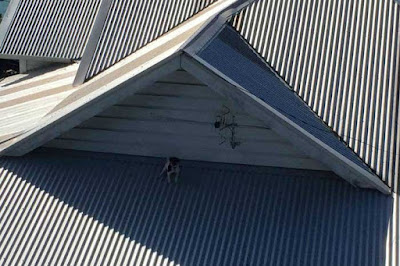 "She doesn't usually go out and about like that so it was a bit worrying," he said. But his mood suddenly changed once he spotted her and the worry turned into laughter. "When I saw her she was just sitting there looking like a right dickhead," he said. Mr Grant believes Polly would have had to get inside the neighbour's house and through a window to get to the roof but hasn't figured out how. "I don't know how they hell she got into the house. I can't find a cat door or anything so I've got no clue." 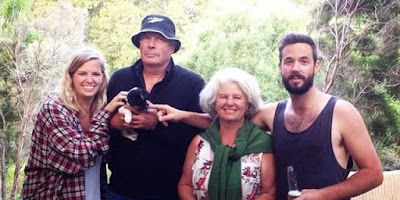 He didn't know if the neighbours were home at the time, but thinks Polly could have snuck in the door as the neighbours left. Mr Grant stood on the fence between the properties and "just reached up" to get Polly, who didn't take much coaxing to come back down to earth. "I think she was pretty happy to get back down. She looked nervous because I don't think she likes the heights – she's just a small little girl – but once she was in our arms she was fine." To prevent further escapades, Mr Grant will be checking the fenced in property for a hole where Polly might have got out. But it doesn't mean he'll necessarily be keeping a closer eye on where Polly gets to. "I like her adventurous nature."
Posted by arbroath at 6:04 am
Email ThisBlogThis!Share to TwitterShare to Facebook