Four men have been caught on CCTV robbing a service station in Melbourne, Australia, and filling a quilt cover with their loot of stolen cigarettes, before spilling it as they fled in a car. The group, all wearing hooded jumpers, gloves and hiding their faces, broke into a service station on the Burwood Highway at Tecoma. 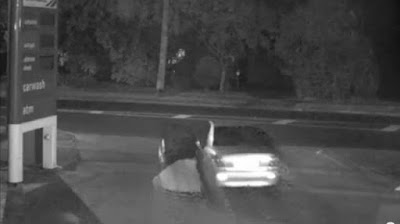 Two of the men smashed their way in at about 2:30am before running to the car with a quilt cover filled with cigarettes. When they failed to fit the bursting cover into the boot, they then decided to drag the sack alongside the car as they escaped. Police said they lost about a third of their loot in the process as it trailed along the road.

The thieves also used a quilt cover to make off with cigarettes in a similar incident at a shopping centre in nearby Kilsyth. Police believed the group has also targeted five other places including service stations in the past few months. It is believed the thieves have stolen up to $38,000 worth of goods.

"They were probably surprised by how much they got in the end and just failed to focus on the getaway plan," Constable Gavin Rhodes said. "I would describe them as fairly efficient, they obviously know what they came there to do. They seem to be focused on obtaining cigarettes." Police have released CCTV footage of the incident at Tecoma in the hope someone would recognise the men.
Posted by arbroath at 6:02 am
Email ThisBlogThis!Share to TwitterShare to Facebook