Police in Florida say a woman poured barbecue sauce on her husband and chased after him with a knife in each hand on Tuesday, according to an arrest report. Viven Palmer, 30, faces charges of battery, aggravated assault with a deadly weapon and resisting an officer. She was later released from the Palm Beach County Jail on $5,000 bail.

On Tuesday morning, police were called to an address in Riviera Beach where a 30-year-old man was waving and yelling from his front door, “Help, police!” Officers say they heard a woman, later identified as Palmer, yelling from the home, but when she came outside, she refused to speak with them. Instead, she just put items into a parked car outside the home. 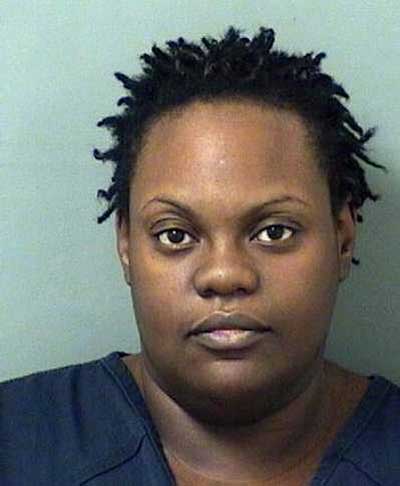 Police said two children, ages 4 and 9, were seen in a car, according to the report. Though she refused to speak with police and told them to leave her home, her husband said the two were arguing about getting a divorce. He said things turned violent and his wife came after him, damaging property along the way.

Police noted the home appeared to be ransacked. He said his wife ripped off his shirt, poured barbecue sauce on him and hit him. When he fought back, he realised she had grabbed butcher's knives from the kitchen, so he ran outside. Palmer has no previous criminal history, according to county records.
Posted by arbroath at 6:05 am
Email ThisBlogThis!Share to TwitterShare to Facebook