A thief in Iowa failed in his recent attempt to steal a truck but didn't come come away empty handed, instead stealing a bag of dog poo.

Police were dispatched an adress in Des Moines to meet with a man about a burglary. The victim told police that someone had broken into the driver's side door of his truck. 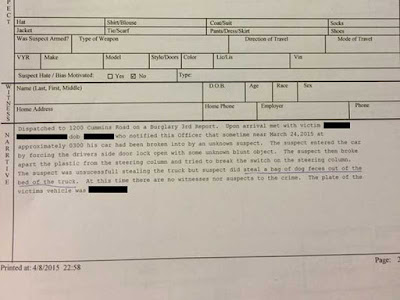 Using an unknown blunt object, the suspect reportedly broke the door lock open, then broke plastic from the steering column and switch of the truck.

The victim claims that when the suspect failed at stealing the truck, the thief checked the bed of the vehicle and stole "a bag of dog faeces," the report states. Police have not identified any other witnesses or suspects to the crime, but if found, they may face third-degree burglary charges. The dog faeces were valued at $1.
Posted by arbroath at 6:06 am
Email ThisBlogThis!Share to TwitterShare to Facebook

Jester and Wishbone are gonna make me rich!!!