A woman from Kingsport, Tennessee, readily admitted to police that she hit her husband on the head with a hammer to protect her cats and to prevent him from picking on her, according to a police report. Officers with the Kingsport Police Department were called to an address in Kingsport late on Sunday afternoon regarding an assault. When officers arrived, they met with Mary Dollen, 58, who initially made the call to police. While speaking with Dollen, the responding officer noticed blood on her shirt.

When asked what happened to her to get blood on her shirt, Dollen allegedly responded, "It's probably my husband's. I hit him in the head with a hammer." Dollen told officers her husband was suffering from alcohol withdrawals and had been shaking. She gave him some alcohol to help with the symptoms and then left. When she returned to the home, she told police her husband had consumed more alcohol. She reportedly told police the two were watching TV and started to argue. She then told police her husband fell asleep and while he was asleep, she armed herself with a hammer. 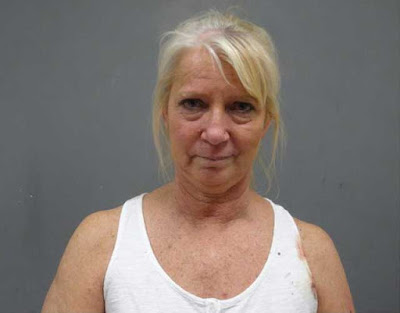 When he woke up, the two began arguing again. She told police her husband said, "I'm going to kill you bitch." Then the argument reportedly turned toward Dollen's cats. A short time later, she walked over to where he was sitting and hit him on the head with a hammer. Dollen allegedly told police the reason she hit him was out of fear for her cats and that she was tired of him picking on her, according to the police report. When Dollen hit him on the head, she told police it knocked him back and once he discovered he had been hit, he left the scene in a vehicle.

While police were speaking with Dollen, the victim arrived at the house with a large cut on his forehead and another large cut at his hairline. The victim was questioned separately. According to the police report, the victim did not remember what happened. He told police he was asleep on the couch when his wife hit him on the head with a hammer. He denied threatening Dollen and repeatedly turned down medical attention after responding to multiple questions correctly. Dollen was then arrested for aggravated domestic assault and transported to Kingsport City Jail.
Posted by arbroath at 6:06 am
Email ThisBlogThis!Share to TwitterShare to Facebook