A woman from Centre Hall, Pennsylvania, is accused of attacking her 82-year-old boyfriend. State police at Rockview were called to Mount Nittany Medical Center on Friday morning after getting a report of a man receiving treatment after an assault. They arrived and interviewed the man and Bonnie Treaster, 46, who told troopers that an unknown person entered the man’s home and assaulted him, according to police.

But on Monday, the man was released from the hospital and met with state police at his Potter Township home, where he told them a different story. According to court documents, the man told police that Treaster assaulted him in “an outrage of jealousy.” The man reported that Treaster first slapped him in the face, began throwing things through the house and punched him in the eye, according to police. The man said he then ran from the house to a detached garage, and Treaster followed, threw him on the ground and was on top of him “to the point he could hardly breathe,” according to police. 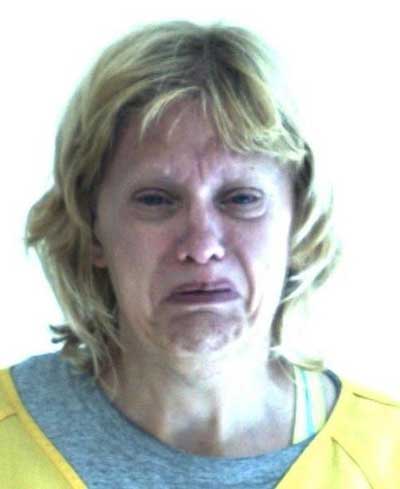 He also reported that she struck him on the head with an exhaust clamp, grabbed a hacksaw and tried to pull down his pants. He said he ran from the garage in the hopes someone would see him when he noticed a badly bleeding groin wound, police said. Treaster followed him in a pick-up truck and he got in and they went back to the home. He reported that once they got back in the house, she began yelling again and struck him in the mouth with a wing tip of a model airplane, according to police.

The man said he and Treaster fabricated the story about the unknown assailant on the way to the hospital. He sustained lacerations that needed stitches on his head and finger, a black and blue left eye, an injury to his genitals and a minor brain bleed, according to court documents. A bloody hacksaw was found in the garage Treaster is charged with two counts each of aggravated assault and simple assault and a summary harassment charge. She was arraigned on Tuesday morning before District Judge Carmine Prestia, who set bail at $75,000. A preliminary hearing is scheduled for May 27.
Posted by arbroath at 6:07 am
Email ThisBlogThis!Share to TwitterShare to Facebook