Charles Abbott arrived at court in Aspen, Colorado, on Tuesday with a stuffed owl and placed it on the defence table in front of him. “He’s a very sensitive guy, has law degrees from Yale, Harvard and Stanford,” Abbott told Pitkin County Court Judge Erin Fernandez-Ely. “I think he’ll be able to represent me before a public defender comes online.” But the fluffy horned owl that Abbott called “Solomon,” had no influence on the hearing’s outcome. Fernandez-Ely casually ignored its presence when Abbott introduced it, and she moved along with the court’s business. Abbott’s court appearance was to address a protection order that took effect after he was accused of assaulting his former roommate, Michael Stranahan, at an Alcoholics Anonymous meeting on May 9. Authorities again arrested Abbott, 67, on Saturday on suspicion of violating the court order by going to Stranahan’s home to collect some belongings. 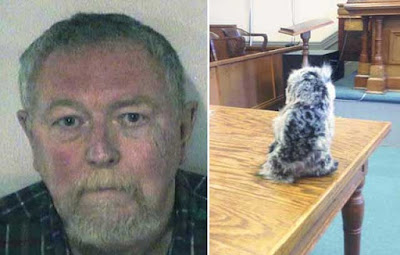 Stranahan said he had previously thrown Abbott out of his place. Abbott told Fernandez-Ely it was a misunderstanding; Stranahan said Abbott took some of Stranahan’s possessions. “I was pretty clear that Mr. Abbott was not to go there,” the judge said. Fernandez-Ely asked Stranahan, 75, if he wanted to modify the protection order so that the two can undergo mediation to patch up their differences. Stranahan declined. “I want it to remain in place because I don’t feel safe about being in close proximity to Charles Abbott,” Stranahan said. Stranahan said he was out of town on Saturday when Abbott’s friend, Eric Nilan, called to ask if he could collect some of Abbott’s possessions. Nilan, who recently was released from jail after being sentenced to four years of supervision for felony stalking, asked Stranahan if Abbott could join him, Stranahan told the judge.

“I said Mr. Abbott cannot go to my house because of a little piece of paper (the protection order),” Stranahan said. But at 8:30 that night, Stranahan received a call from Pitkin County Sheriff’s Deputy Adam Crider, who said Abbott was in his house. “He asked if that was OK, and I said it was not OK,” Stranahan said. He added, “I think it would have been OK if Eric had gone by and got what he needed, but he didn’t do that, and I feel a violation of trust. So there you have it - I don’t know what to do.” Stranahan also said he doesn’t want Nilan to be involved as a conduit between him and Abbott anymore. “I think it puts undue pressure on Mr. Nilan,” he said. Abbott had hoped the Rev. Nicholas Vesey of Aspen Chapel could bring the two estranged friends together. Vesey told the judge he knows both men and that they attend his church.

“To me, it’s tragic to see them at odds with each other,” he said. Vesey said he normally doesn’t get involved in domestic disputes but that Abbott had asked for his help. Even though a protection order is in place, Abbott can still attend church when Stranahan is there. But he isn’t allowed to have any contact with him, the judge said. After Abbott learned that Stranahan didn’t want to make up, he accused his ex-friend of numerous misdealings. He also alleged Stranahan was wearing his L.L. Bean flannel shirt. “I’d like to point out that Mr. Stranahan is wearing one of my shirts, the blue one,” he told the judge. “That is not his shirt; that is mine.” Fernandez-Ely told Abbott his remarks were out of scope with the hearing and that if Abbott wants to retrieve his belongings from Stranahan’s home, he needs to make sure there’s a deputy on the scene.
Posted by arbroath at 6:06 am
Email ThisBlogThis!Share to TwitterShare to Facebook