A Florida man is facing charges of public intoxication and disorderly conduct after going for an unconventional ride on a stranger's car. It happened last Sunday morning on South Ocean Boulevard in Manalapan. Witnesses said it all started when Jonathan Restrepo, 25, of Coral Springs, jumped out of his girlfriend's car in the middle of traffic.

Restrepo jumped onto several cars and even jumped into a convertible going 20 mph, according to a man who shot cellphone video. "He was running around like a monkey with his tongue out, waving his arms in the air, jumping on top of cars," the man who recorded the cellphone video said. One driver didn't stop, and kept driving down A1A with Restrepo on the roof of her Nissan Altima. 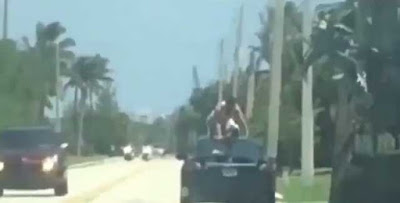 In the cellphone video, you can see Restrepo scrambling back and forth on the roof on his knees, even peering in through the windows at the terrified driver. Eventually, as seen in the video, Lantana and Manalapan police arrive coming the other way on A1A and Restrepo jumps off the car and bolts for a grassy area by the Intracoastal Waterway. "When he went to run away from the cops, he didn't even run away from them," the man who recorded the video said.

"He ran a few feet and then ran back at them. He was really confused, just acting crazy. I've never seen anything like it." Restrepo followed police orders to lie down on the ground. Officers say Restrepo told them he was using crystal meth and that someone was after him. He was arrested on charges of public intoxication, disorderly conduct and criminal mischief for causing more than $1,000 damage to two different cars. Restrepo was taken to a hospital after being arrested and has since been released.
Posted by arbroath at 6:05 am
Email ThisBlogThis!Share to TwitterShare to Facebook