A 56-year-old woman was arrested for allegedly flashing at lawn mowing service workers and dropping her pants.

Neighbours called police reporting that a woman was flashing at the workers from her front yard and porch, according to a police report. Police arrived at the residential neighborhood in Des Moines, Iowa, just before 4 pm on Wednesday. 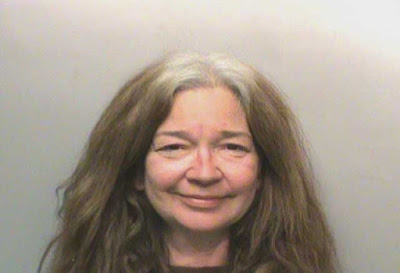 They found Tamara Zhane Harvey, 56, who admitted to lifting her shirt and dropping her pants but said she had underwear on. Neighbours said she had exposed her breasts, genitals and backside.

Harvey was highly intoxicated when police spoke with her, police said. No breathalyzer test results were noted in the report, however. She was arrested on a charge of indecent exposure and is being held at the Polk County Jail on a $300 bond.
Posted by arbroath at 6:06 am
Email ThisBlogThis!Share to TwitterShare to Facebook

She has the smile of "Yup, that was a good day."

That smile makes her look fun. I think I could like her.