A man reportedly stripped naked in the Charlotte Douglas International Airport in North Carolina early on Wednesday morning after he became angry about a flight being overbooked. Police say he will not be facing charges. According to witnesses, the man was attempting to get on board a US Airways flight to Jamaica. 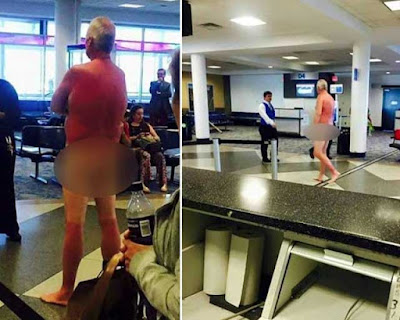 "I seen some people running and I was wondering what they was running from and people were standing there snickering, so I walked over and [an airport employee] told me the man was angry over the Jamaican flight," Sherry Ketchie said. Ketchie says the man sounded very angry and was yelling.

"He had his clothes on, at that point, and then he started standing there with his arms crossed and hollering at the lady at the desk," she added. "He stood there for a moment and then started taking off his clothes. I ain't never seen nothing [like that] in my life." She says the man didn't say anything as he was taking his clothes off. "More people started getting back because that's when security started surrounding him, waiting for Charlotte-Mecklenburg police to come in," she said. 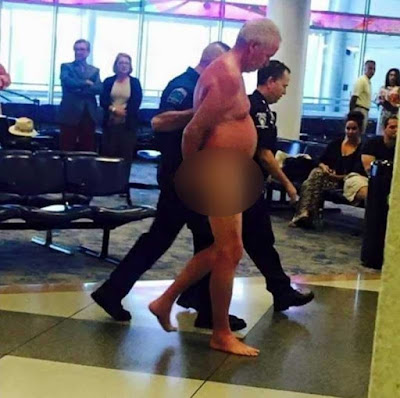 "I was not expecting to see nothing like that, I've never seen nothing like that at Charlotte Douglas airport. Never," she said. "And that's when I got out my phone and started taking pictures." She says the man was standing in the concourse naked for about an hour. Charlotte-Mecklenburg Police confirmed they responded to a "disturbance call where a male was suffering from a medical issue." They said the man was taken for treatment and will not be facing charges.
Posted by arbroath at 6:05 am
Email ThisBlogThis!Share to TwitterShare to Facebook

Can you tell by the quotes how intelligent the locals are?

No, Shak, I don't think you can. I think you can tell from the quote that the person has a particular style of speech. I wouldn't draw my conclusions about her intelligence from that.

Using double negatives is never a style of speech, but ignorance.

Shak, I generally enjoy your comments on this blog.
I disagree with you about this issue, however, and I am positive we won't convince each other, even if we were to get into a lengthy back-and-forth.
I think that "intelligence" manifests itself in many ways. I think that conventions of speech vary by region, class, degree of education, culture, race, background, etc. I think there are some very well-spoken people who are very "stupid" and some very smart people who speak in ways that are looked down upon by those who hold the power.
And I think it's important for all of us to question our own assumptions about people that we may make based on surface/incomplete information, especially if it may contribute to the larger ongoing problems of racism and classism.
That's why I said something.
Also, wasn't this a story about a man who expressed his anger by taking off his clothes in an airport? What does this say about his "intelligence"? (One possible answer: not enough information. Intelligence is difficult to measure.)