North Texas entrepreneur Alex Craig, 24, is making a steady income by sending potatoes through the mail. The app developer by day came up with a business idea to send anonymous custom messages to whoever you want on a potato. 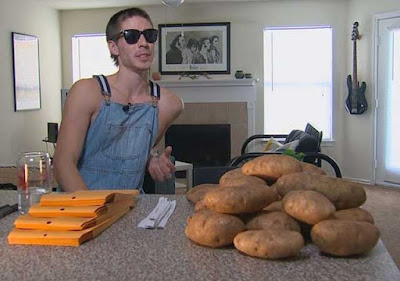 "I would say the two things that hold everyone back in life is fear and doubt," Craig said. "The fear of failure and the fear of wasting your time, and the doubt that you can actually achieve something big on a huge scale." Craig said he came up with the idea for Potato Parcel earlier this year while having dinner with his girlfriend. 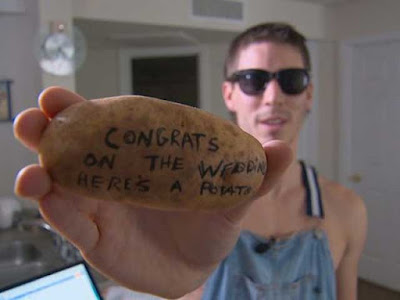 "She said, 'You will not sell a single potato. This is the stupidest idea I've ever heard,'" Craig said. "On our second day that we were live we got $2,000 in orders, and I just knew this was it." It's a simple idea. Users go online and order a potato, ranging from $8 to $10, add a custom message, and send it anonymously.

Craig says he's sold over 2,000 potatoes, and he's clearing $10,000 a month in profit since he launched the site in May. "We've sent thousands of potatoes to people across the United States, and so, in some sort of weird way, we've had an impact on somebody's life - even for a split second," Craig said.
Posted by arbroath at 6:07 am
Email ThisBlogThis!Share to TwitterShare to Facebook

If this potato story is true, it gives the rest of us struggling mugs inspiration.

This is great. What a clever way to waste food. Schmuck.

Why on earth would anyone want to pay $8 to send someone a message on a potato?