Investigators looking into a break-in early last Sunday morning at a Subway shop in Nevada, Missouri, were surprised to see that the culprit wore a blue Morphsuit. 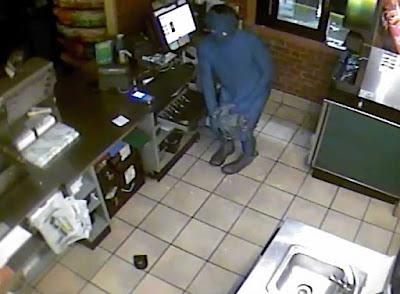 Police learned of the burglary at the restaurant in Nevada, a city about 90 miles south of Kansas City, when an employee went to open the shop for business and found someone had forced entry through a drive-through service window. 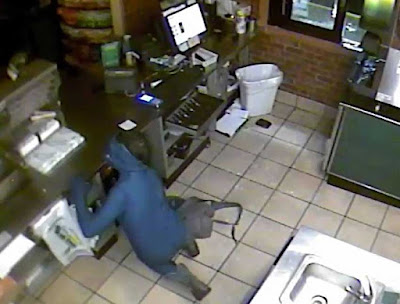 While it was subsequently established that nothing was missing from the store, a review of the store's surveillance system video showed that was not for lack of effort. On the video, detectives came across a burglar emerging from darkness at the back of the store in a full-body, spandex-type costume known as a Morphsuit. He also had on a pair of cowboy boots. 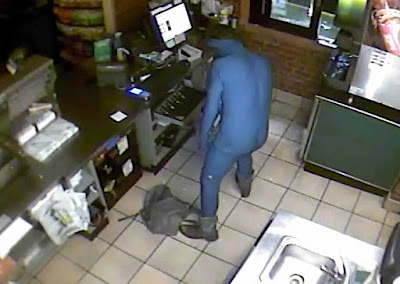 Police say the suspect made multiple attempts to open the store's safe punching in numbers on the safe's keypad. After several failed attempts, he began kicking the safe's handle. Finally, he gave up and left the store the same way he had entered, police said. Nevada Police issued four photos on Monday in the hope that the public can help them locate the “blue burglary suspect.”
Posted by arbroath at 6:06 am
Email ThisBlogThis!Share to TwitterShare to Facebook