An adventurous seal has made a 75 kilometre (47 mile) journey through the canals of the Waikato in New Zealand before running out of steam outside a farm shed. But the frisky female, named Cedrica, still had enough energy to chase a police officer around a patrol car before being swaddled up by the Department of Conservation. The wayward seal was discovered lying high and dry near Morrinsville on Sunday morning. A passer-by noticed something unusual on the roadside and called police. 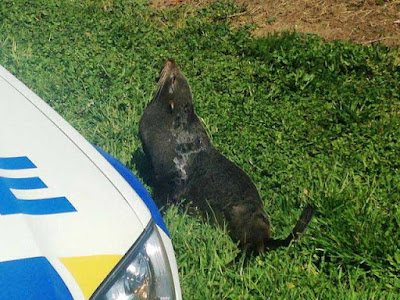 Morrinsville police Sergeant Vic Sneddon said. "We have images of her chasing one of our staff around a patrol car so while it may have had problems adjusting its internal GPS, she still had plenty of life left in her. But in terms of how she came to be there in the first place, its lips were definitely sealed." It is not known exactly when the seal began its journey from the Firth of Thames but Department of Conservation ranger Garry Hickman believed it used the Piako River to navigate in and out of the canals during heavy rain.

"They come up the rivers, sometimes there can be one or two. They are chasing trout, mullet, koi carp, so it's not hard for them to get a feed. They have to chase the fish - they are opportunists." Hickman arrived at the farm to find the docile seal napping in the shade about 15 metres from the road. "It looks like it had been out of the water for quite a while as it was pretty dry, the nearest drain would of been about 100 metres away." He said the seal, measuring about 1.5metre long, made a move, clambering through a farm fence into a paddock. 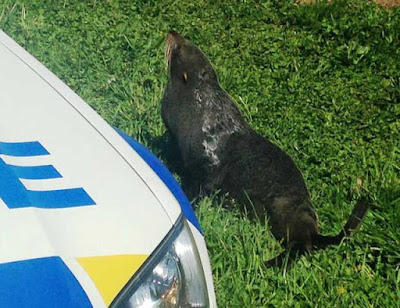 "You can walk up to a seal and it looks really docile but they can react like lightning." With the help of police officers, the trio approached the seal from different directions, boxing it in. "I threw a net over it while it was looking the other way. It hissed and snarled and bared it's teeth as they do." The seal was then put in a polypropylene box and driven to Tapu where Hickman released it back into the sea from the beach. "When I let the bag go on the rocks she popped her head up, looked at me, and swam back into the ocean."
Posted by arbroath at 6:03 am
Email ThisBlogThis!Share to TwitterShare to Facebook