A French driver said it was a miracle he wasn't killed after being given the shock of his life when a 500 kg cow fell from the sky and landed on the bonnet of his car.

The driver was travelling down the departmental road 900 to take his stepson to school near the town of Perthus, on the border with Spain in the Pyrenees mountains. As he drove along he was brought to an abrupt stop when the cow crash landed on his car. 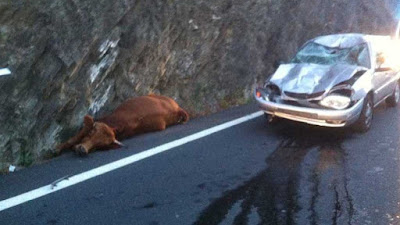 The cow had been walking along a cliff high above the road and lost its balance. The animal fell to the road below just as the car was passing, with the bonnet taking most of the impact, although one of the cow’s horns did pierce the windscreen.

The cow did not survive the impact, but luckily the driver and his stepson who was in the passenger seat, escaped unhurt. “We were more scared than hurt,” the driver said. “The car is dead but we are miracles. I was very affected by the death of the animal. With the best will in the world I couldn’t avoid it.”
Posted by arbroath at 6:04 am
Email ThisBlogThis!Share to TwitterShare to Facebook

Okay. -NOW- we know the origin of these signs: