Police temporarily shut down a pizzeria in Edmonton, Canada, after officers discovered the shop was delivering more than just pop and pizza.

Officers allege store employees hid cans of beer and bottles of hard liquor inside cardboard pizza boxes and paper bags, and delivered the booze after hours. In a raid of the property, police say they confiscated 240 beer cans and 100 liquor bottles, amounting to thousands of dollars' worth of alcohol. 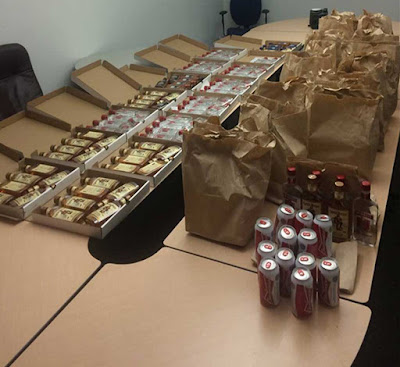 "We did a quick approximation, it's about $1,800 to $1,900 worth of booze," Edmonton Police Services Sgt. Curtis Hoople said. But sold illegally, Hoople said that amount of alcohol could fetch much more. "We estimated about $4,000 of street value for this booze," he said.

"So they're more than doubling profits on illegal sales of alcohol." Police are not naming the business involved in the case, but say the store was shut down for a day and four employees are facing fines. It's now up to the courts to decide whether to press for additional penalties, which could include revoking the store's business licence.

There's a short news video here.
Posted by arbroath at 6:06 am
Email ThisBlogThis!Share to TwitterShare to Facebook