A competition to guess the weight of a man's amputated leg has raised over £1,500 for charity. Peter Rowswell, from Langport in Somerset, who had suffered from clubfoot since birth, had his left leg removed below the knee last week. The 30-year-old invited friends and family to guess the weight of his severed limb to raise funds for the Royal National Orthopaedic Hospital. 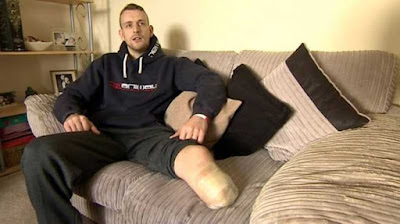 His leg weighed 3lb 8oz - about the same as three and a half tins of beans. The winning guess was made by Mr Rowswell's father, who predicted it would weigh 3lb 10oz. "I told him at the time it was a cheeky guess," said Mr Rowswell, who had expected the leg to weigh more. "I've got spindly legs because of my condition so the calf muscles haven't developed properly, " he said.

The prize was a bottle of champagne donated by Mr Rowswell's employer. Mr Rowswell, who holds black belts in a number of martial arts, said he plans to get back to training and back on a motorbike as soon as possible. He will be fitted with a prosthetic leg in a couple of months and aims to be back at work in six months. 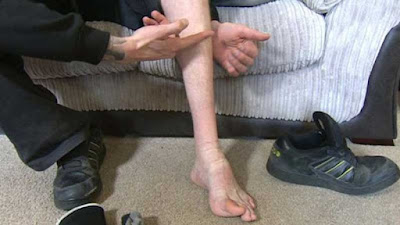 "I was quite clear how I felt that this is it - the start of my better life," he said. "I do look at where my leg was and think 'I can't believe I've actually done it - had my leg chopped off' but I don't regret it, never in the slightest." Mr Rowswell said took the decision to have his leg removed due to needing a "stupid" amount of pain relief just to walk.
Posted by arbroath at 6:03 am
Email ThisBlogThis!Share to TwitterShare to Facebook