A local TV reporter in Minnesota was given a lesson in breaking news on Monday as the subject he was reporting on ran right past him. 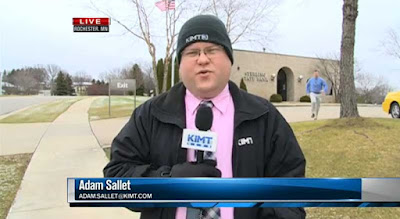 KIMT reporter Adam Sallet received the cue that he was live during the station’s noon broadcast when a man ran out of the Sterling State Bank in North Rochester behind him. Sallet, oblivious to the man rushing towards him, began his report. “That guy right there,” the man, who is a bank employee, told Sallet as he ran past. 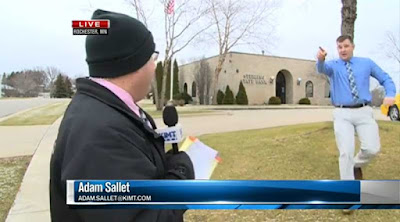 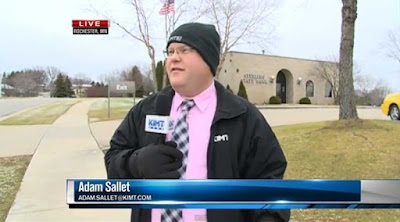 Sallet, confused, eventually realised what was happening and exclaimed: “Oh, that’s the robber.” Flustered, but remembering he was broadcasting, Sallet explained that he must end his report to call 911. It turns out that the robbery happened the day before and the suspect had returned to the scene.

Sallet explained later in the broadcast he saw the man walking around before his live shot acting suspiciously and thought nothing of it. Fortunately, the attentive bank employee did. 36-year-old Ryan Liskow, of Rochester, was later arrested and is in custody after allegedly attempting to rob the Sterling State Bank again on Tuesday after he got away on Monday.
Posted by arbroath at 6:07 am
Email ThisBlogThis!Share to TwitterShare to Facebook