Peter Gabriel wants to teach chimpanzees to use Skype

Musician Peter Gabriel has long been interested in extending use of the internet to other species. As part of the Interspecies Internet project, which he has been working on with pioneers such as Vint Cerf, one of the architects of the internet, and academics such as Neil Gershenfeld, professor at the Massachusetts Institute of Technology (MIT), Gabriel is planning to run an experiment at Monkey World, the Dorset-based chimp rescue centre. 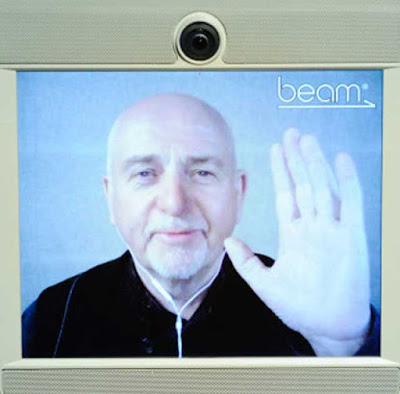 If the experiment goes ahead, a spokesperson for Monkey World said the plans were still at a very early stage and wouldn’t comment further, the hope is to see if chimpanzees could learn to use videoconferencing to communicate with each other. “The idea is to extend a big video network that already exists in labs at [MIT] so that different species including our own have a chance to communicate,” said Gabriel. “I am also interested in how they would use the internet to communicate.”

After that, he would be looking at how they could communicate with us. Exciting as it sounds, there are likely to be obstacles. “In the 70s there was the idea to try and teach [chimpanzees] sign language to see if that would help them communicate with us,” says Dr Bridget Waller, director of the Centre for Comparative and Evolutionary Biology at the University of Portsmouth. “We don’t really do that any more. It’s more about trying to work out what their communication – their calls, facial expressions and gestures – is about, rather than trying to teach them artificial ways of communicating.” 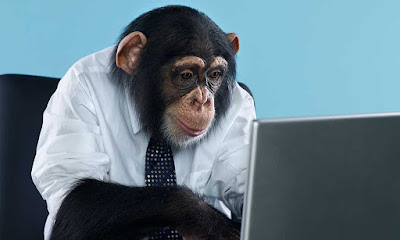 Primates are also very territorial, she says, and if they think an animal they don’t know is in their enclosure, there may be issues. Asked if the project will improve communication with humans, Waller said: “I think we’re already pretty good at communicating with primates when they’re in captivity. We use touchscreens in our facility at the Isle of Wight, with macaques. We have shared communication systems in place. We know what some of their facial expressions and gestures mean. Whether videoconferencing will help that, I’m not entirely sure.” If nothing else, technology might enrich the lives of captive primates, she says. “Primates are complex creatures and they need to be stimulated when we keep them in captivity.”
Posted by arbroath at 6:01 am
Email ThisBlogThis!Share to TwitterShare to Facebook

I've seen this movie. It doesn't end well for us.

Peter, don't you know you're gonna shock the monkey?