Wallaby rescued after being found swimming more than a kilometre offshore

A swamp wallaby found swimming more than a kilometre offshore from the north coast of New South Wales, Australia, has been rescued by a group of marine students. The students, from the National Marine Science Centre, found the wallaby, now nicknamed 'Swampy', lost at sea while on a diving trip near Arrawarra, north of Coffs Harbour, on Monday. The exhausted wallaby swam towards their boat, where they pulled him in and calmed him down. 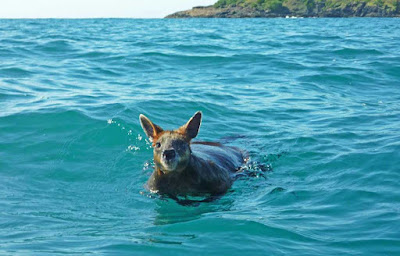 They turned the boat around and headed back to shore, releasing him on a nearby beach. Laura Sanchez-Peregrine was among those on the boat, and said at first they were not quite sure what it was doing so far out at sea. "We see this thing swimming - it's like a hairy thing," she said. "At first I thought it was a seal, but we came closer and it was a big wallaby, maybe a 25-kilogram wallaby - a big male. He looked really, really exhausted." 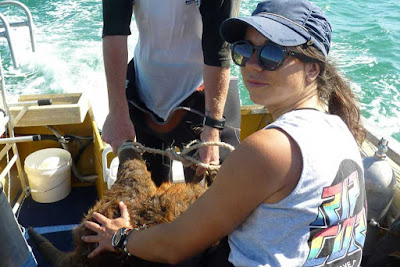 Ms Sanchez-Peregrine said she and the other divers, Ian Shaw and Jesse Madden, decided they had to help him get home, but it was no easy task. "We decided to help him, but it was really difficult to bring him on board," she said. "It's a really small tinny, and he had really long claws, so it was pretty scary and he wouldn't let us grab him." They eventually used towels and a rope to secure him and get him on board, where he lay still in the centre of the boat. 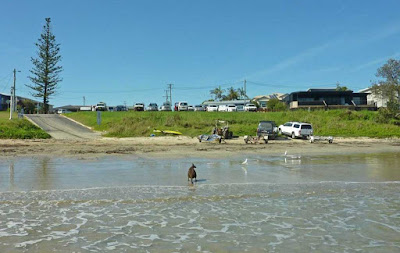 She said he was in remarkably good condition and took off shortly after they dropped him back on shore. "He stayed on the beach for two minutes, super exhausted standing there, couldn't move at all," she said. "And then yeah, he just went - hopped off and waved goodbye." Swamp wallabies have been known to swim, but Ms Sanchez-Peregrine said the group did not know what led this one so far out to sea. "Maybe he got scared by a dog or something," she said. "And was taking a swim or having a splash around, and suddenly this dog came and he swum in that direction - and then got lost."
Posted by arbroath at 6:06 am
Email ThisBlogThis!Share to TwitterShare to Facebook