An artwork consisting of a massive pair of clasped hands has had to be moved away from a cathedral path due to people bumping into them. The 20ft tall (6m) sculpture, called The Kiss, was positioned at Salisbury Cathedral, inviting people to walk in-between the wrists. 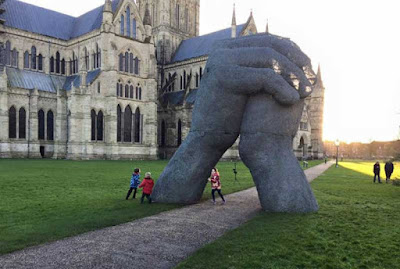 But it has been shifted off North Walk as a decision was taken that it was not well enough illuminated in the dark. Artist Sophie Ryder said that people were "walking through texting". Some had "bumped their heads", she said.

Ms Ryder posted on Facebook: "We had to move 'The Kiss' because people were walking through texting and said they bumped their heads! Oh well!!"Canon Dr Robert Titley, the cathedral treasurer, said the clasped hands "form an arch which positively invites you to walk underneath". "That was working fine, at least during the day," he said. 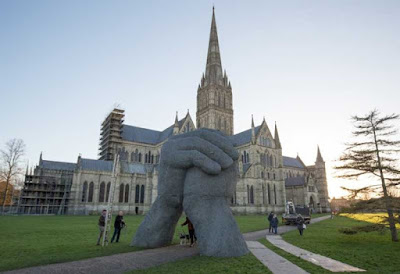 "We then picked up a couple of signals that during the hours of darkness one or two people had bumped into it. We could see how, if you didn't see too well in the dark, this could be a hazard. So we've moved it a few metres onto the grass." The artwork is part of an exhibition by the British sculptor which began a week ago and runs until 3 July.
Posted by arbroath at 6:01 am
Email ThisBlogThis!Share to TwitterShare to Facebook