An 88-year-old man in Australia has been charged with reckless driving and had his yellow Porsche Carrera 911 seized under hoon law legislation.

Forrestfield Police said in a tweet on Sunday afternoon that the man was caught speeding in the Hamilton Hill suburb of Perth. 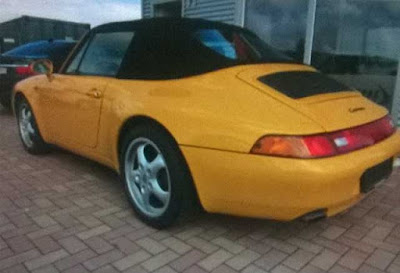 Police say the man was caught allegedly travelling at 122kmh in a 70kmh speed zone by a speed camera on February 28.

He was issued a surrender notice and summons for reckless driving on Sunday. Cars can be impounded for 28 days under hoon offences in Western Australia if a driver is caught exceeding the speed limit by more than 45kmh.
Posted by arbroath at 6:02 am
Email ThisBlogThis!Share to TwitterShare to Facebook

Huh. Learned a new word. In the States, we just call them douchebags.

Bullshit, 75 in a 40 with a capable car and experienced driver is not reckless driving. It is speeding, and under the hoon law they can impound his vehicle, but the reckless driving charge is because somebody, probably the cop, had a hardon for him.

Just because you've got a pretty little roadster, doesn't mean you should be driving recklessly on the road. There's no insurance in the world that can bring you back from the dead.