Home contractors are used to finding odd treasures behind walls and under floors, but in mid-February, Alif Babul and his brand new employee Dean Materi noticed something extra unusual amid a dusty pile of rubble while ripping apart a home’s bathroom in Calgary, Canada. It was Materi’s second day working with Babul as a plumbing apprentice. 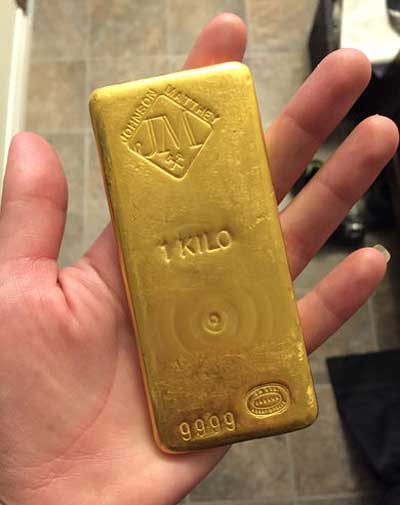 “I seen a gold shimmery thing on the ground and I thought it was a copper light fixture,” Materi said. “But when I went to shovel it up, it seemed kind of heavy. I picked it up and it was a gold brick.” Materi inspected the cellphone-sized one kilogramme gold bar imprinted with a serial number and the stamp of a well-known jeweller. Babul, the owner and operator of home improvement company Perfection Plumbing & Gas Ltd., couldn’t believe his eyes.

“Finding a gold brick underneath a tub is kind of strange,” he said. The duo’s research led them to believe the brick was worth more than $50,000 and they soon contacted the homeowner, who confirmed a gold bar was unaccounted for in the abode. “We were pumped when we found it, of course,” Babul said. “Seeing the economy the way it is right now, it kind of sucks that we had to give it back. Obviously we were going to do the right thing.” 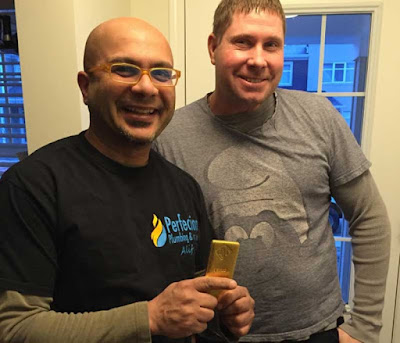 The gold brick now tops the list of valuables Babul has uncovered while renovating Calgary homes, ahead of several rare original Daredevil comics he found on a previous job. “We always return what we find,” Babul said. Babul believes the gold bar was stashed near the bathroom’s jacuzzi tub and over time was moved by the vibration of the motor. The homeowners had previously searched their bathroom for the lost treasure and said they were thrilled to be reunited with the missing chunk of change.
Posted by arbroath at 6:05 am
Email ThisBlogThis!Share to TwitterShare to Facebook

"who confirmed a gold bar was unaccounted for in the abode"

Well ... why is this confirmation less than, um, convincing? Would the owner have said, "Nah. Not mine. Have nothing to do with it. It's yours"?

But, I'm happy to hear of the honesty of the contractors.

Lurker111: I was thinking something pretty similar. "Oh, yes, that err.. gold you say? Yup, lost a load of it pretty recently."

I hope the home owners did the right thing and rewarded the contractors. Would've been awfully easy to just slip that bar in a pocket and walk out. Wrong? Yes. But still, very, very easy.

Honesty and integrity like that should be recognized monetarily.

I wonder if an Insurance Company has all ready paid for the loss?

@Amy. Actually, that would be a bad idea. People pick between moral, social and financial motives - they don't add them together. So if you offer a monetary reward, people just abandon the moral/social one.

This explanation is covered by SDT (Self Determination Theory) for anyone who really wants to geek out on it :-D
https://en.wikipedia.org/wiki/Self-determination_theory

Tapejara said... "@Amy. Actually, that would be a bad idea. People pick between moral, social and financial motives - they don't add them together. So if you offer a monetary reward, people just abandon the moral/social one. Let's say you offered them £/$ 10,000, as Ronnie O'Sullivan was recently - they might be prompted to think '$10k cash or a $50k gold bar? ...i'll take the bar' So your offer actually motivates theft!"

Except it wasn't an offer. It would be a reward. They had already made their choice (the correct one in my opinion) and they should be rewarded. The gold bar had already changed hands.

Are you arguing that other people would hear of this and steal gold bars in the future, knowing that the reward was less than the value of the bar? They probably would have anyway.

"...knowing that the reward was less than the value of the bar? They probably would have anyway"

It was, and they didn't. Zero money *is* less than the value of the bar. My point stands :-P