A woman's body was found inside a lift in China a month after it was improperly switched off, a regional government statement said. Her body was found in a residential building in the city of Xi'an in Shaanxi province.

The elevator had been turned off by two maintenance workers on 30 January. The body was found when other workers arrived on 1 March. Police are treating the death as involuntary manslaughter. Several people have been arrested. 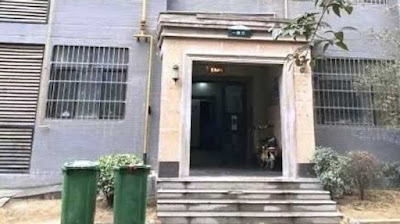 One local report said scratches were found inside the lift, one of two inside the building. It is believed the woman was 43 years old and lived by herself in the building, the statement by Gaoling's government said. Her family did not visit her often, it added.

The workers had been called to fix a fault with the elevator and had shouted to see if anyone was inside. Their failure to check properly amounted to "gross negligence", government officials said. The work on the broken lift was delayed partly because of the new year holidays.
Posted by arbroath at 6:04 am
Email ThisBlogThis!Share to TwitterShare to Facebook