Man fighting for his life after being bitten by pet cobra

A North Carolina man is fighting for his life after he was bitten by his pet king cobra. After he sustained the snake bite on Monday evening, Ali Iyoob tried to drive to a hospital for help. But he didn't make it very far, according to the 911 call he made. "My vision’s kinda blurry," Iyoob said on the call. "I’m sweating like crazy. I’m like panicking. I feel nauseous." 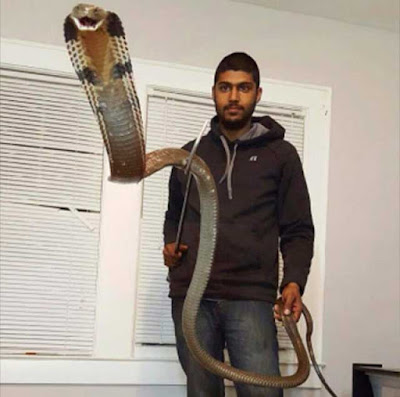 Iyoob then apparently pulled over on a highway, where paramedics found him nearly unconscious, officials for Orange County Emergency Services said. He was rushed to University of North Carolina (UNC) Hospitals, where he was listed in critical condition, officials added. Iyoob remains in critical condition, UNC Health Care spokesman Tom Hughes said. King cobras are the world's longest venomous snakes.

They can deliver enough venom in a bit to kill 20 people or an elephant. Officers with Orange County Animal Services are currently working in coordination with several other agencies to remove the king cobra and around 20 other snakes Iyoob apparently was keeping as his house, communications specialist with the agency, Andi Morgan, said. The agency said that its staff was "working closely" with other agencies to to determine if any state statutes were violated.

"If a violation is confirmed, Animal Services will coordinate with those organisations to identify, seize, and care for the reptiles," the statement said. "If no state violation is present, Animal Services will work internally to devise the best plan for the removal of the snakes. County ordinance does not permit the keeping of venomous or constricting snakes inside Orange County." Animal Services officials added it had "no reason to believe there is a reason for public safety concerns."
Posted by arbroath at 6:07 am
Email ThisBlogThis!Share to TwitterShare to Facebook

Good job snake! Any American who keeps a cobra as a pet is better off dead as far as community safety is concerned, and if he is going to do something that antisocial and crazy, what would he not do?

This story unlike the others would be improved if "Yaketty-Sax" were added to it. Strike it off the dog post above and append it to the cobra & dumbass reptile fetishist post. That would be an economic and aesthetic masterstroke IMO, if technically infeasible.