Witnesses say a road rage incident in Miami-Dade County, Florida, on Tuesday could have been a lot worse after a man was seen clinging to the hood of a car that was speeding down the road. 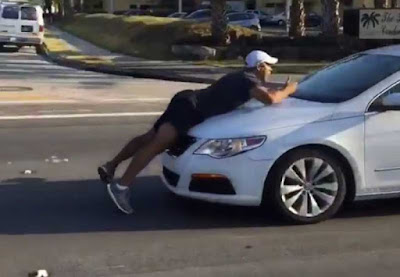 Witnesses said a man got out of a black sedan and jumped onto the hood of a white car after getting into an argument with the driver of a Volkswagen. The driver of the car then hit the accelerator. 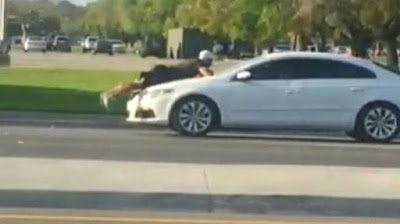 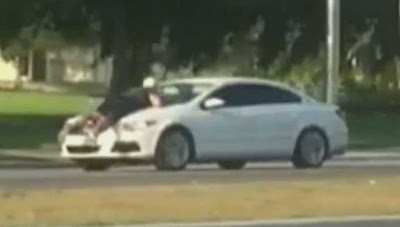 They then cut up another driver to pull a U-turn from a middle lane, all with the man clinging to the hood. "It's crazy. I've never seen anything like it," Sebastian Roldan said. "Someone on top of the car just rolling, that's crazy."

The car sped away, turning into traffic from the middle lane and barely avoiding a collision with a black sedan. The white car continued with the man still on the hood. It eventually came to a stop and the man got off the hood, apparently uninjured. "They're both not very smart," Alex Rimart said. Police were notified about the incident and are investigating.
Posted by arbroath at 6:07 am
Email ThisBlogThis!Share to TwitterShare to Facebook

Simple solution to a stowaway:

Driver of white car speeds up to 55 mph. Then slams on brakes. Outdoor passenger is ejected. Driver stomps on gas. Out door passenger is road kill and driver goes merrily on his or her way..