Cat and bear have formed an unlikely friendship

A feral cat and a black bear at a zoo in California have formed an unlikely bond. The two furry black mammals have become inseparable at the Folsom City Zoo Sanctuary after the cat moved in. 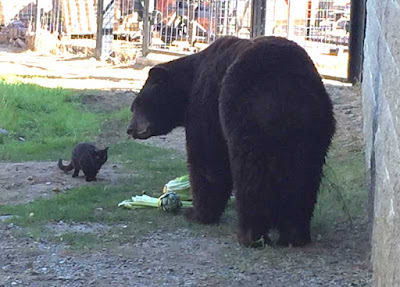 Zookeepers have called the cat "Little Bear," because of how she trails behind the 550-pound bear, Sequoia. Zoo officials said the feral cat showed up at the zoo a few years ago and set up her residency with the black bears, Sequoia and Tahoe. 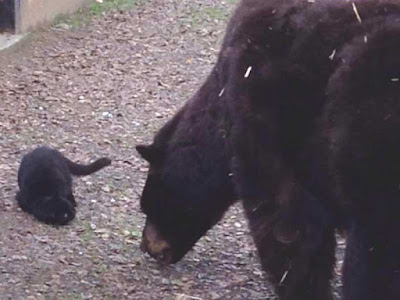 The cat took a special liking to Sequoia, they said. "The cat pretty much ignored female Tahoe, but apparently the female cat is working to becoming male bear Sequoia’s new best friend," the zoo said. Often when Sequoia takes a hike through the 'bear forest' his cat friend walks with him.

Although the cat moved in with the bear a few years ago, the unlikely animal friendship has only recently started getting attention. The animal sanctuary has officially become Little Bear's home, and the feral cat no longer lives off of rodents but receives a bowl of canned cat food every day at feeding time.
Posted by arbroath at 6:05 am
Email ThisBlogThis!Share to TwitterShare to Facebook