An 11-year-old girl from Athens, Georgia, who was arrested for taking a knife to school said it was needed to fend off clowns.

The arrest occurred on Friday at Burney-Harris-Lyons Middle School, amid recent news reports about unsubstantiated claims that clowns have been terrorising children in Georgia and other states. The girl was taken by the principal to the front office where she was questioned by a police officer. 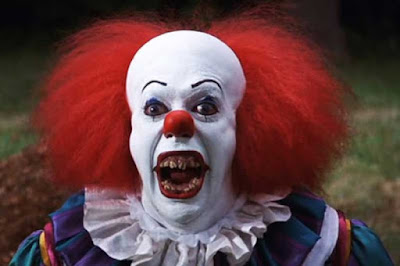 “She said that the reason she had the knife was for protection for her and her family because she had heard the stories about clowns jumping out of the woods and attacking children,” the officer wrote in an Athens-Clarke County police report. According to the report, police contacted an official with the Georgia Department of Juvenile Justice who instructed them to release the girl to her mother on a charge of possession of a weapon on school grounds.

Anisa Sullivan Jimenez, spokeswoman for the Clarke County School District said that school administrators have not addressed clowns with the student body as a whole. “Our elementary comprehensive health curriculum addresses personal safety with students,” she said. “We have not specifically addressed clowns, except in individual cases where students expressed concerns directly to teachers.”
Posted by arbroath at 6:04 am
Email ThisBlogThis!Share to TwitterShare to Facebook

"...We have not specifically addressed clowns."
Hello,Clown.