He was called in to help the firm after six staff members were forced into taking redundancies at the start of the credit crunch. Mr Taylor told them that, by stripping off their clothes, staff could also strip away inhibitions and talk to each other more openly and honestly.

He said: "Inviting an organisation to go naked is the most extreme technique I've used. It may seem weird but it works. It's the ultimate expression of trust in yourself and each other." Despite some initial reluctance, nearly all the staff took off all their clothes – except for one man, who wore a posing pouch, and one of two female workers, who kept on black underwear. 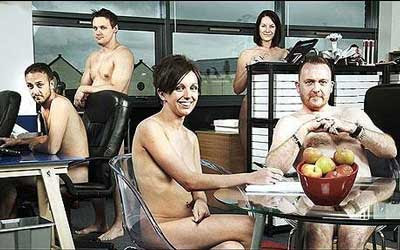 Sam Jackson, 23, the house manager, was the only woman to go fully naked. She said: "It was brilliant. Now that we've seen each other naked, there are no barriers. We weren't put under pressure. If we wanted to come in clothed or in our underwear, we could. But I love my body and wasn't ashamed. We're all beautiful, whether we've got big bodies or small ones."

Miss Jackson, who suffers from cerebral palsy, said: "It took a week of David being in the office for us to build up courage. The first few steps were very nerve-racking but, once I got to my desk and got used to it, I felt totally comfortable.

"It was emotional but we found we were much more able to talk to each other honestly – and have been since. The company has improved massively."
Posted by arbroath at 9:51 am
Email ThisBlogThis!Share to TwitterShare to Facebook

Just to say what a brilliant idea, stripping off for the day was, it got you to know each other better and hopefully boosted morale. I think all office staff should have a naked day now and again, or why not work naked all of the time. We spend far too many hours in our clothes. I would jump at the chance to work naked alongside my collegues and wihed I worked for you. I do hope you will do it again soon, or better still why not always work naked.