The shop owners call it clever marketing, the locals call it pornography. The cut-out drawing of a naked woman with a pizza slice covering her nether regions in the window of Pizza Supremo in Murray Bridge, Australia, has had tongues wagging.

But owners Damien Eve, 37, and Sarah Budarick, 35, who have had to remove the artwork after a visit from the police, say they don't know what all the fuss is about. They moved into the Swanport Rd premises earlier this year and proudly displayed the eye-catching piece - painted by Mrs Budarick and entitled "A Slice of Heaven" - above the shop's verandah. 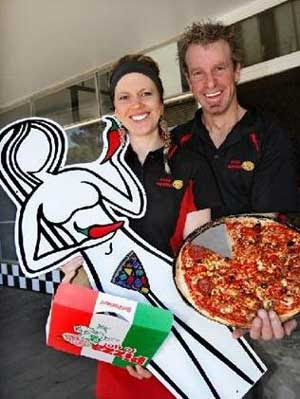 Gloria Booker, Murray Bridge Council's manager of development and environmental services, said she had received four written complaints and six phone calls about the sign on Pizza Supremo's roof, which is close to a primary school.

"May I remind the council that teen and childhood pregnancy is on the rise and this form of advertising only increases curiosity in children and leaves them vulnerable to exploitation, sexually transmitted diseases and infectations (sic)," one concerned mother wrote.

Advertising Standards Bureau CEO Fiona Jolly said the sign might not violate regulations because of its lack of "graphic nudity", but said an investigation could be launched if the bureau received a formal complaint. "The ASB would look at several things before making a ruling," she said. "That would include whether it's a real person or a cartoon-style image and how real is the representation of nudity?"
Posted by arbroath at 7:11 am
Email ThisBlogThis!Share to TwitterShare to Facebook

All meat pizza and no anchovies...

"May I remind the council that teen and childhood pregnancy is on the rise and this form of advertising only increases curiosity in children and leaves them vulnerable to exploitation, sexually transmitted diseases and infectations (sic),"


.... So like now these children actually have been found to ask to and to find out with- eachother if they have pizza at that lower-not-to-be-mentioned-Region.... or something like that?

Come on- Children make less fuss about this than grownups while in the meantime it is the grownups who forget to speak with their children in normal i.e. not frustrated ways about this subject so that the children will be able to have responsible attitudes toward sex...