The 58-year-old client, who drove a BMW car, collapsed in a shower after an “intense session” with prostitutes calling themselves Mistress Lucrezia and Mistress Juno, at their villa near Brecht, Belgium. It is believed he may have died after being given nitrous oxide to act as an anaesthetic to the “extreme pain” administered by the women.

They have been arrested and charged with assault and battery leading to death, without intent to kill. The Foreign Office confirmed that the family of the 58-year-old, who has not been named, have been informed. 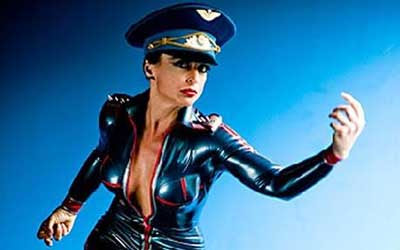 Mistress Lucrezia, 46, has a website which says she considers herself a “Creative Artist Perverted Sadist” who offers “bondage, humiliation, torture, education and cross-dressing”. It says: "Sessions can last from one hour, and even up to three days.

"I specialise in extreme medical and long sessions. Beware, I am not a softie. I'm sadistic, intelligent and perverse. In my nature, I'm a sadist of the worst kind." The victim can not currently be named for legal reasons, and until his next of kin have been informed.
Posted by arbroath at 8:05 am
Email ThisBlogThis!Share to TwitterShare to Facebook

Yeah but did he have a smile on his face?