A reveller at a fancy dress party in one of Dublin's best known gay bars attacked her ex-girlfriend in a row over a novelty wrestler's suit. Sandra Talbot (32) assaulted her ex-partner with a bottle she had hidden under her costume in a fit of rage at the George pub, after more than a year of acrimony following their break-up. A court heard she lashed out at victim Adrienne Martin in a row that started over a novelty sumo wrestler's suit that Talbot was wearing. The row developed as the victim tried to wave at a man dressed as a Snickers bar, the court heard. Ms Martin told Dublin District Court how she was left with a large lump on her temple and still suffered from panic attacks because of the incident. Talbot denied any physical contact happened and said Ms Martin had "ruined her life".

Convicting her and fining her €400, Judge Catherine Murphy said she hoped the accused and the "loosely linked group of friends" who had become involved in the court case could put it behind them. Talbot, of Greenfort Close, Clondalkin, had pleaded not guilty to common assault on Ms Martin at the George on George's Street on Halloween night, 2008. Ms Martin told the court she was out for the first time in several months, following the death of her sister from a brain aneurysm. She had been in an on-off relationship with Talbot for three years which had ended in March 2007. During the evening Talbot, who was wearing an inflatable sumo suit, bumped into her. When she turned around, the accused said to her: "Keep smiling, c**t." Later, a man dressed as a Snickers bar began waving at her and when she went to wave back, Talbot pushed her arm from behind. When she asked what the problem was, Talbot said: "Your arm's in my way." 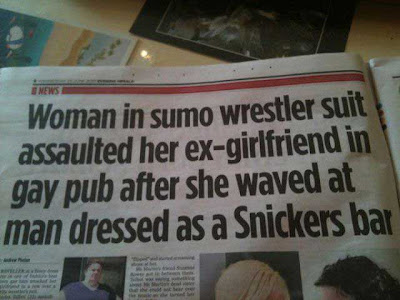 When she again asked what her problem was, Talbot "flipped" and started screaming abuse at her. Ms Martin's friend Suzanne Bowes got in between them. Talbot was saying something about Ms Martin's dead sister that she could not hear over the music so she turned her head to listen. "The next thing, I got a blow to the left side of my head beside the temple," Ms Martin said. "My knees went from under me and I went down. She walked away, laughing and sneering at me. I had a massive lump on the side of my head." Ms Martin said she saw a Smirnoff Ice bottle fly from the defendant's sleeve. The State solicitor said the prosecution had no evidence that a bottle was used in the assault other than Ms Martin's word. The accused was escorted out and had to be asked to partially deflate her costume so she could get out the door.

Witnesses for the defence said they saw no physical violence and that the two women just "exchanged words". The defendant told the court she had been brushing off a lot of people on the night because her costume was so big. She said that Ms Martin told her: "Watch where you are going with that thing" and she replied: "Shut up and grow up." The accused, who has worked as a sports instructor for disadvantaged youths and is now training to be a tattoo artist, claimed Ms Martin had been telling lies about her on social networking websites. "I had a big row with her but I didn't touch her," said Talbot.
Posted by arbroath at 8:06 am
Email ThisBlogThis!Share to TwitterShare to Facebook

If I only had a euro for every time I have seen that headline in the last 10 years....

....on the next Jerry Springer show.