Moments after he passed his driver's test on Wednesday afternoon, a man crashed his car into the glass doors of the licence exam centre in Collier, his startled instructor still in the passenger seat. The car skidded clear into the building, where about 10 customers were seated in a waiting area. 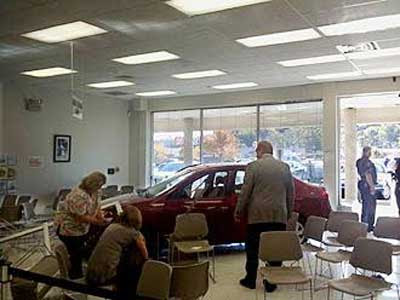 Police said the man, in his 30s, had pulled into a parking space outside the Drivers Licence Centre at about 3:45 pm after taking the test in an area behind the sprawling Chartiers Valley Shopping Centre. "He thought he had it in park but he didn't," Collier police Sgt. Brian Halbleib said, and the car jumped the kerb when he took his foot off the brake. "He panicked and hit the accelerator, and went through the front."

Stunned customers screamed and called 911, witnesses said, bits of broken glass on the floor and in their shoes. Long skid marks were still visible on Wednesday night, as clean-up crews assembled new glass windows and doors behind a ribbon of yellow caution tape. "It was pretty crazy," said 18-year-old Tyler Cherilla, of Imperial, who was among those waiting to get his licence. "I turned around and it had just ploughed right into the front. I was just scared for the people who were next to the door." 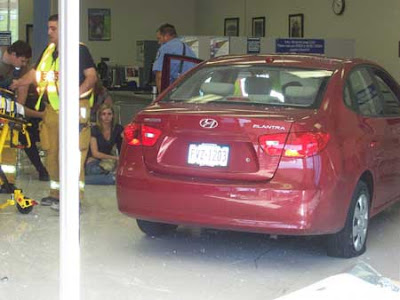 Four people suffered only minor injuries, and two were taken to hospitals for evaluation. Neither the driver nor his instructor, who works for PennDOT and administered the test, was hurt, said Sgt. Halbleib, who wouldn't identify them. Both men were "shaken up quite a bit," he said. As for the driver, the sergeant added, "He just kept apologizing. He didn't mean to do it. Right now, we're ruling it an accident."
Posted by arbroath at 8:05 am
Email ThisBlogThis!Share to TwitterShare to Facebook