Despite added security measures for Shirley the smoking orangutan at the Johor Zoo, visitors are still throwing lit cigarettes into her cage – hoping to see her smoke them. 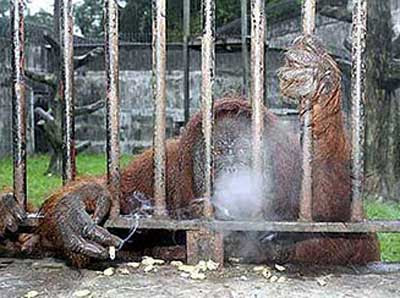 Student Norkamalia Kamaruddin, 11, said it was horrible that people were throwing cigarette butts into Shirley’s enclosure to encourage her to smoke. “I saw her holding several cigarette butts to her mouth,” she said.

Norkamalia said the zoo authorities should impose heavy fines on those caught smoking and throwing cigarettes into any of the animal enclosures.

Businessman Mohd Riduan Mohd Nor, 31, said the zoo authorities should increase surveillance especially around the orangutan enclosure. “Since Shirley has already picked up the habit, we have to slowly rehabilitate her,” he said.
Posted by arbroath at 7:06 am
Email ThisBlogThis!Share to TwitterShare to Facebook