An unemployed 22-year-old bricklayer who claims he found a fairy has caused a commotion in this western Mexican metropolis. Jose Maldonado, who charges a monetary “donation” in exchange for displaying what appears to be a simple plastic figure kept in a container of formaldehyde, says he has already received 3,000 visits from people eager to see the so-called fairy at his home in Lomas Verdes, one of Guadalajara’s poorest and most dangerous neighbourhoods. 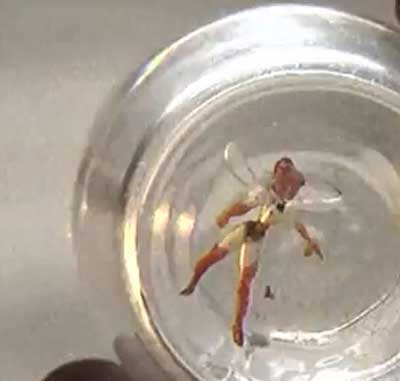 “I was picking guavas and I saw a twinkling. I thought it was a firefly. I picked it up and felt that it was moving; when I looked at it I knew that it was a fairy godmother,” Maldonado said. The tale of the fairy that Maldonado claims to have discovered last weekend has run like wildfire through the area and his home is now besieged by the curious, some of whom wait for up to an hour to enter.

What Maldonado shows the paying public is a small container filled with formaldehyde containing a humanlike figure about 2 centimetres (0.8 inch) tall, with a gelatinous consistency and a certain resemblance to Peter Pan’s Tinkerbell. Maldonado says that what seems to be just a little plastic figure is a fairy and that it was alive when he found it. And there are those who believe him. “I’ve seen everything and, yes, I believe the fairy is real. Therefore, I wanted to come to confirm that those myths are true,” Cesar Ramirez, one of the visitors, said.

To be allowed to examine the “fairy” for a few seconds and take a photograph of it, the curious must make a donation to financially help out Maldonado, who recently lost his job. His neighbours have also taken advantage of the situation to sell photographs and keyrings with the image of the fairy for about 20 pesos ($1.60), as well as refreshments including drinks and food to those people while they wait in line outside Maldonado’s house.
Posted by arbroath at 6:06 am
Email ThisBlogThis!Share to TwitterShare to Facebook

One born every minute.

Hey, at least he has proof, of a sort.

There's people out there who believe in some giant psychopath in the sky who will set them on fire if they set so much as a foot wrong, and all they have is a bunch of folk stories and fairytales written some 2000 years ago by maniacs on bad shrooms.

Well, if I understood correctly, his own mother doesn't believe him.

I'd pay for it. You'd gain the experience of seeing a cute hoax and you could talk to your friends about it. It's neat.

They say that experience makes you happier than things, so buy experiences if you can ;)

Here is a photo of the toy he got it from:

Gee, u think we could maybe get a better pic? I mean yu got something so special right? oh yeah I'll just pull out my pixel vision camera and take a picture of it for the world! The supernatural take shitty pictures.

Not impressed. I went to SanFran last year and the place is full of them.

I use a strong insecticide to get them out of my garden!

Colin's link is the answer to this story, it is a plastic toy.

Faeries ARE real however good luck capturing one considering they are not of this realm.

Simple minded people who scoff at the idea of faeries and that consciousness is limited to the material human body really haven't a fucking clue about the true nature of reality. It's that simple. =D

This is why Mexicans are destined to cut grass the rest of their lives. Seriously, I know we have some stupid people in the US but c'mon man.

they shouldnt have put her in the formaldehyde alive. this is exactly why they hate us and hide from us, if i get the chance ill find a way to get there just to beat their ass. idiots, destructove uncaring idiots. i feel so sorry for her.