Agrafena Vasilyevna was quizzed by police for rustling when she pinched her neighbour's stallion on her 80th birthday to tick off one her dreams on her bucket list.

Agrafena - from Tverskaya, Russia - told police she had always wanted to ride but had never had the chance. 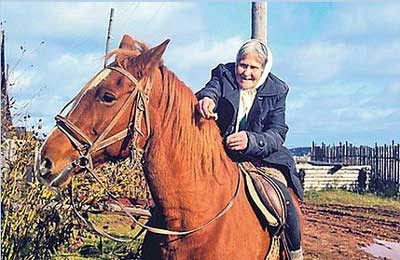 So she crept into neighbour Igor Vasilev's stable, saddled up his horse Lyme and galloped away. When she returned an hour later she found her neighbour and a police car waiting for her.

"They told me off but it was worth it. I've fulfilled a dream I've had since childhood and I was running out of time. I've got a few more things on my list so people should stand by to be shocked," explained Agrafena.
Posted by arbroath at 6:03 am
Email ThisBlogThis!Share to TwitterShare to Facebook

I can't really condone stealing a horse or at that age just jumping on a horse without knowing how to ride (if she fell she could be seriously hurt).

Yet, fair play to her.