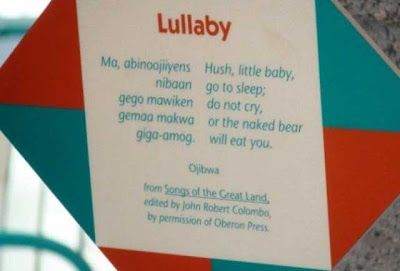 This is appparently in Ojibwe.
http://weshki.atwebpages.com/blc_grammar.html Though I don't see anything about the bear being naked. Bonus points for extra disturbing imagery though.

There the wrinkled old Nokomis
Nursed the little Hiawatha,
Rocked him in his linden cradle,
Bedded soft in moss and rushes,
Safely bound with reindeer sinews;
Stilled his fretful wail by saying,
"Hush! the Naked Bear will hear thee!"

(Which should have been bleeding obvious, but nobody gets taught poetry at schools these days...)

Of course, the Ojibwe don't have a monopoly on disturbing lullaby imagery.

I remember one from my own youth that featured a baby in a cradle stuck at the top of a tree and being blown about by the wind. Then the bough breaks sending the baby, cradle and all, crashing down to an almost certain death. Comforting.