They're an odd pair. The female half is quiet and aloof, imposing even as she approaches a half-century of life. The other is just a boy still, tiny with a twitchy nose and a propensity to hop around like young boys do. Samantha and Panda. The gorilla and the Dutch rabbit. Erie Zoo officials introduced the two in mid-February after deciding that Samantha, a 47-year-old western lowland gorilla, ought to have a companion. 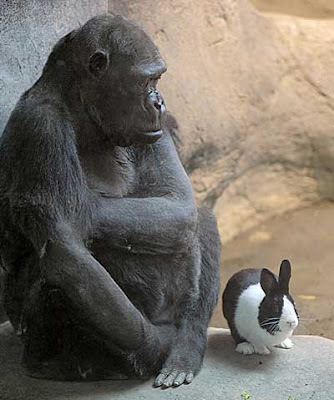 She's been without any other presence in her exhibit since Rudy, a male gorilla, died in 2005 at the age of 49. Those two never did interact much; Sam was hand-raised and relates more to humans than to other gorillas. She's too old and fragile to be paired with another gorilla now, zoo officials said. But she needs the same thing any human does: a friend. Panda is safe and small, no threat to the gorilla. He's something for her to watch and touch. "To have something sharing their space that they can observe and interact with is always going to be beneficial," zoo Director Cindy Kreider said.

Zookeepers started slowly. Panda was moved to an area close to Samantha's night quarters. Then keepers held her up to Samantha for inspection. Panda was let into the exhibit by herself to get the lay of the land. Finally, he was let in while Sam was in there, too - with an escape hatch for the rabbit, just in case. "Right off the bat, they hit it off," Kreider said. Scott Mitchell, the zoo's chief executive, recalled a time shortly after the two were introduced when Panda hopped up to Samantha's beloved Baby, a stuffed toy gorilla. Know this: No one messes with Baby. Samantha "pushed the baby out of the way so Panda could go by," Mitchell said.

Another time, she scratched underneath Panda's chin. She shares her food. She reaches down to touch Panda, gently. "It was amazing to see," Mitchell said. "And the reaction from the public has been amazing, too. People are intrigued by it. They like the fact that she has a companion." Samantha has never been aggressive toward Panda. A younger gorilla might have been a different story, but keepers spend a lot of time with Sam and know her personality. Still, Mitchell admits to having been a little nervous when the two were first introduced. He needn't have worried. "He's fearless," Mitchell said of Panda. "He's not threatened by her. More often they're closer together than they are farther apart."
Posted by arbroath at 6:05 am
Email ThisBlogThis!Share to TwitterShare to Facebook

I shot this video and run a rodent rescue in the area. I went out of concern, as you can tell they are very friendly to each other. I have never seen anything like it and approve very much of the pairing. Erie Zoo deserves to be applauded for thinking outside the box!

Thank you for shooting and sharing the video, blueeyedtyrant.