Police who raced to a house after hearing desperate heavy breathing during an emergency call found a dog had rung 999 while strangling itself with the telephone wire. George, the two-year-old Basset Hound, had knocked the phone to the floor and got entangled in the wire — winding it round his neck. And he panicked so much he incredibly managed to ring 999 as he pawed at the phone trying to free himself. The emergency operator alerted police who dashed to the empty home of driving instructor Steve Brown and his daughter Lydia, 18 on Saturday night.

They were preparing to smash down the door when a family friend from a nearby house ran out with a key to let them in. Four officers sprinted through the house in South Hiendley, West Yorkshire, searching the rooms. And then neighbour Paul Walker walked into the living room and found terrified George choking — with the phone lead wound tightly round his neck. Paul, 41, ripped the phone apart to wrench the wire from George's throat. 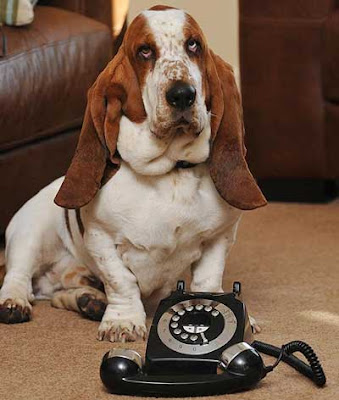 He said: "The police split up and ran through the house thinking someone had either been attacked or was desperately ill. I went to look round as well and walked into this room and saw George choking. He was absolutely terrified and could not free himself. I knew I had to get him free quickly so I just ripped the wire out. Incredibly you could see where his paw print was on the phone to ring 999 — he literally saved his own life. When the police came into the room and realised what had happened they burst out laughing.

"They told me they had been sent out because of a 999 call in which the operator could only hear heavy breathing and gasping. They thought someone had collapsed or been attacked." Paul had been left a key by college student Lydia to feed George later in the evening while she went out to do an evening shift as a waitress. Lydia said: "By the time I got back the police had gone and George was looking a little sorry for himself. It is just so lucky that his paw managed to ring 999 otherwise he would have died. We still don't know how he managed it. It's one of those old-fashioned phones with the dialling ring. He's not usually very smart."
Posted by arbroath at 6:04 am
Email ThisBlogThis!Share to TwitterShare to Facebook