A cat which was discovered in central Sweden "with a limp" was taken by police and shot dead, and then dumped on a roadside. The cat's devastated owner has since had his application for an internal investigation denied. "Cissi was everything to me, she was my rock," cat owner Göran Hjalmarsson said. Hjalmarsson said the cat had an extremely regular routine, including snuggling up at his feet every night, and returning home at a specific time every day. "She was part of my family, she understood me. I couldn't sleep if she wasn't nearby. I live alone now, and Cissi had been my only consolation after my daughter died of cancer ten months ago. Cissi was all I had left," he said.

Hjalmarsson was dismayed when his loyal cat did not return home as usual one night in mid-March. After a few days of fruitless searching, the man called the police, who told him that the cat had been found the day before and had been shot dead by police, who claimed that the identification tag on the cat's ear did not lead to an owner. The local police reported that they had indeed called the communications centre at the police station, yet had been told that no owner came up on the system in correlation with the ID number. The two police officers then shot the cat dead and dumped the body, stating that the cat looked as if it had been hit by a car. When Hjalmarsson enquired as to where he could find Cissi, he said that the officers could not give him conclusive answers as exactly where she was dumped. 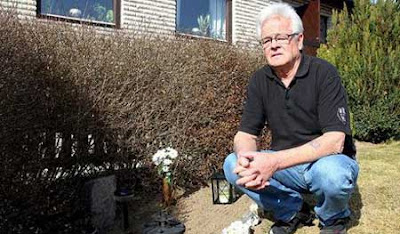 Hjalmarsson was forced to go and find the body himself, which some children had found and buried. He dug up the cat, and re-buried it at home next to his other two cats. Upon inspection of the body, Hjalmarsson claims he couldn't find any signs of a traffic accident, and the only visible injury was the entry hole of the bullet in the cat's breast. Since, Hjalmarsson has called for an investigation into officers' actions, arguing that it was not their responsibility to put down the cat, and that a veterinarian should have been involved. Furthermore, the man demanded an apology, and is seeking more answers, as well as compensation for the ordeal. "I'm extremely saddened by the whole thing, I want the police to come to my home and apologize. I want answers," he said.

However, police stated that no investigation would be forthcoming. Instead, Jan Mattsson of the Östergötland police claimed that the police department will look into how similar incidents are performed for the future. "This was no good. Firstly, one can't leave animals like that. Secondly, we must be more careful with reading the ID marks and we must put more work into getting the animal to its owner," he said. But the decision doesn't sit well with Hjalmarsson, whose prolonged sorrow is slowly turning to anger as he continues to search for answers about why Cissy was shot. "The police are lying to me, I don't understand it. This is a serious crime," Hjalmarsson said.
Posted by arbroath at 6:06 am
Email ThisBlogThis!Share to TwitterShare to Facebook