A man who was arrested on Monday in connection with a house fire, was found by fire investigators as he was hitting the head of a decapitated cat with a baseball bat near the property.

Danny Davis, 32, was arrested by Anderson police shortly after firefighters responded to a fire at his aunt’s house at about 4 p.m. 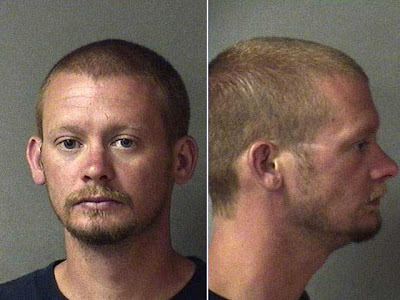 Fire Chief Phil Rogers said no one was harmed in the blaze, and the fire was extinguished in about an hour. An investigation shows the fire was started with gasoline on the back porch. The fire spread to the dining room window and caused exterior and interior damage.

Rogers said investigators found Davis “playing baseball” with the cats’ head. Police spokesman Joel Sandefur said Davis is being held at the Madison County Jail, but charges were not available.

There's a news video here.
Posted by arbroath at 6:08 am
Email ThisBlogThis!Share to TwitterShare to Facebook

This happened pretty close to me, and folks around here are horrified and enraged. The consensus is that he should be treated the same way he treated the cats.