Bitten off penis in box produced as evidence in court

This was exhibit number one in a Russian court case - the severed manhood of an alleged serial rapist which was bitten off by one of his victims when he tried to force her to have oral sex. Sauna boss Svetlana Serafina, 25, was attacked in in Novosibirsk, Russia, by Dmitry Zubarev, 29, when he turned up pretending to be a customer.

She told the court: "It was a quite day and I'd closed my eyes for a short doze behind the counter, next thing I know I felt a blow to my head. I opened my eyes and saw this man standing in front of me, his teeth were clenched and he had his hands in fists, and he started punching me, then he kicked me to the ground when I tried to flee. 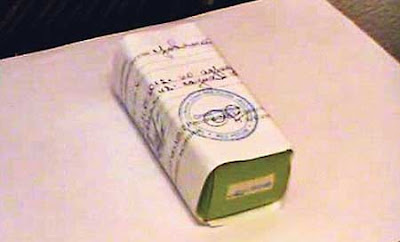 "He was tearing at my clothes and then he pulled down his trousers and put his penis in my mouth, that was when I bit down as hard as I could, and didn't let go." She said the man had tried to pull away but she had held on, ripping off his private parts. The last thing she remembered was seeing him running out of the store screaming before she passed out. The unconscious woman was found by another client with the severed member nearby.

Zuberev who had run to a nearby hospital was arrested a short while later where doctors suspicious of his story had already called police. Police spokesman Vladislav Arsibekov told the court that the missing member had been deemed impossible to reattach, and had been placed in a box to be kept at police HQ until Zuberev’s trial. He was convicted of the attack on Svetlana and after the court heard that he also had previous convictions for sex attacks - he was jailed for life.
Posted by arbroath at 6:03 am
Email ThisBlogThis!Share to TwitterShare to Facebook

I don't condone rape, but that must be the stupidest idea trying it on the orifice with sharp teeth of a conscious person. Pretty smart.

@Brixter. Aparently gag-felatio is the rage since a couple of years ago.

But my question is
What does the defendant say when they bring "it" out in courtroom?
Oh slap it in my face why dontcha.

The punishment fit the crime, and that doesn't count prison for life.

As for me, on https://payforessaywriters.com/argumentative-essay-outline you can read more about Argumentative Essay Outline . It means a lot these days