A New Jersey man celebrating the repeal of a boardwalk bathing suit ban has been arrested for lewdness after he removed his shorts to reveal a Borat-inspired 'mankini'. 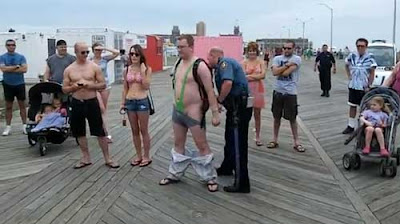 Steve Ettinger, 26, was arrested at Asbury Park's boardwalk at around 1.40pm on Saturday during a bathing suit party to mark the city's decision to scrap a law banning swim suits from the boardwalk.

A man with a microphone urged a topless Ettinger to take off his shorts and show the small crowd the previously forbidden attire, chanting "Borat" to egg him on. The rotund Ettinger begrudgingly complied, unbuttoning his shorts, partially exposing his genitals as he bent down to drop his shorts.

"You just exposed yourself. I saw you," an officer said to Ettinger as he arrested him. Ettinger was cuffed and led away as the small group of activists followed closely behind taunting the police and protesting their friend's innocence. Ettinger has received a summons to appear in court for indecent exposure.
Posted by arbroath at 6:03 am
Email ThisBlogThis!Share to TwitterShare to Facebook

I can't see why he got arrested. Who cares about a naked man? Religion....

Miranda Rights?????? just lock him up dont tell him why god love usa land of the free :/